Leaders 1354 replenishes their webstore with two new colorways of their staple headwear piece. They definitely switched it up good to come up with the Ldrs OG Pink And Camo 59Fifty Fitted Hat. The first colorway is a light-colored headwear piece with the dome and uppervisor in pink. The second variation utilized a jungle camo fabric for that urban apparel look. Both hat colors have the LDRS OG front logo and the 20th Anniversary logo on the right panel embroidered in white. The New Era Flag takes its customary place on the left panel, and at the back is the Leaders 1354 box logo. Available now at the Leaders 1354 webstore. 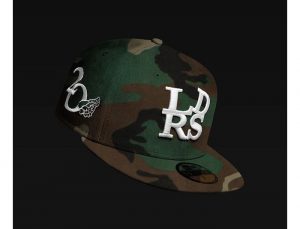