We’ve received a lot of email requests about the cap that UGK’s BUN B wore on the International Player’s Anthem Music Video (R.I.P. PIMP C) featuring OUTKAST. After the inbox was flooded with questions about who created this fitted, we sent our reconnaissance team to find the answers. We stumbled across that answer at the MAGIC Trade show in Vegas. We now proudly present to you the details. The cap in question is made by California based company, 9GRAND. The Wings-n-Things 59Fifty cap, made famous by the video of the smash hit was originally offered Spring 2007 in limited quantities. The drop offered three color ways; White/Purple, Chocolate/ Metallic Gold and Black/ Metallic Silver.

The White edition (pictured above) featured a Purple paisley under bill. We reached out to 9GRAND to comment about a possible re-release of this popular fitted cap. Their response was hopeful that we would see a second drop in the near future. Here’s your opportunity to be heard. Email markh@9grandclothing.com if you would like to see the Wings-N-Things 59Fifty cap return to the shelves.

Word is also circulating that BUN B is intent on a collaborative fitted project with 9GRAND. We’ll keep you posting on the developments as they happen.

In related news, BUN B continues the spirit of UGK with the upcoming release of his album, II TRILL, April 29th on Rap-A-Lot / UGK Records 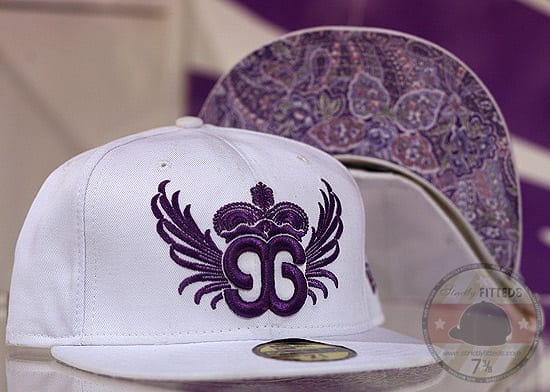